7 Things Women Do That Make Them Seem Clingy 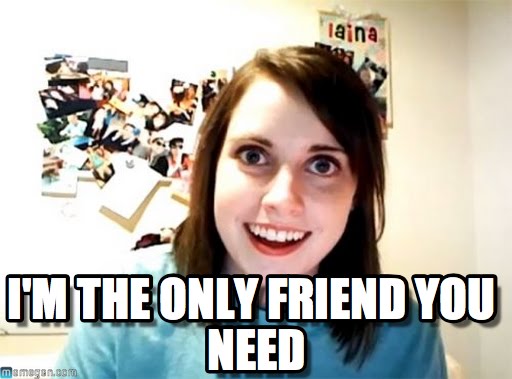 One of the most destructive things a woman can do in a relationship is behaving in a way that is perceived as clingy. This just so happens to be one of the top complaints that men have about the women they are dating. Of course men can be guilty of being clingy too, and I will later discuss how women can deal with the those behaviors of men, but first I’d like to focus on what mistakes women might be making.

1. Excessive calling/texting. This is probably the thing women do most in our current era of technology. They are initiating all or most of the texts, numerous times throughout the day. They will send text after text without getting a reply and get upset when they don’t get a reply immediately. Men typically like texting and talking when they are things to actually talk about. They aren’t so much about aimless chit chat.

2. Over-sharing on social media. This is when you constantly upload selfies of the two of you and  post updates about all your activities together, telling the world how much you are in love. It’s completely understandable to post when there’s something significant going on, but people know that isn’t the case most of the time. The superfluous lovey-dovey stuff just makes you seem clingy and desperate for attention.

3. Not taking hints about when he needs space and time to himself. Sometimes a guy just needs time alone or to hang out with his friends, as surely any woman does as well. In any case, it will turn him off if you are constantly trying to make sure you are a part of his every spare minute.

4. Constantly seeking his approval/needing him to compliment you and express his feelings for you. When you are endlessly fishing for compliments or for him to reiterate his feelings for you, it makes you seem needy for validation. Yes he thinks you are gorgeous and of course he loves you, otherwise he wouldn’t be with you, so chill out and stop asking him so much.

5. Being too available. One thing that makes a man lose respect for a woman than when she is always at his beck and call. When you become too available, he will see that you don’t respect your own life and your own time well enough. Men love a woman who is mysterious and has her own life to lead.

6. Moving too fast. Nothing sends up red flags more than a woman who tries to rush the relationship milestones. Clingy women are constantly thinking about the next step, whether it be dating exclusively, moving in together, or getting married.  Most guys will want to go at a relatively steady pace and let things happen naturally. They can sense that you are forcing progress and focused on locking him down into marriage.

7. Agreeing with everything he says. Some women have the tendency to think that if she has all the same opinions as him, that he will like her more. This is definitely not the case. “Me too” girls are boring. He will  get the impression that you are desperate to get him to like you and it will turn in off. Men are attracted to women who can respectfully disagree with him and defend their own beliefs and values.

Being clingy is lethal in any relationship. Don’t make him the center of your universe. Balance your time between him, yourself, and your other interests and responsibilities. When you adopt a healthy mindset, all else should fall into place naturally and none of these things should be an issue.