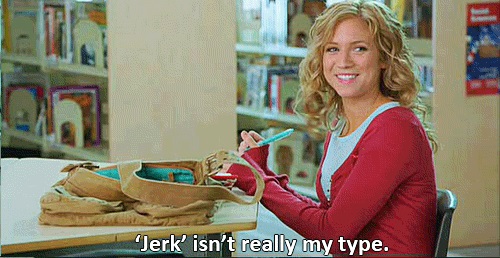 A link to an article came up on my Twitter feed the other day. A girl by the name of Lauren writes this one for Elite Daily called, “I’d Rather Cry Over An Assh*le Than Date A Guy Who Bores Me To Tears.”

I’m going to highlight a few points, but you should definitely read it in it’s entirety.

You know who the boring guy is. He’s the guy you went out to dinner with once and by the end of your first glass of Pinot Noir, you came to the shattering realization that there is a kind of guy worse than the hot dick: the hot guy who’s boring as hell.”

“Assh*les might f*ck you over, but at least they’re doing something.”

“Their function is to annoy you, poke you, get under your skin. They’re there to make you stronger and more capable of handling pain. They teach you about good guys.”

I knew there were girls out there that had this kind of thinking, but when I see it in plain black and white, it suddenly seems much more bizarre to me.

He’s the guy who makes you wonder if maybe you were too harsh on all the dickheads you threw away.”

Nope. I don’t wonder that at all.

They are out of sight, out of mind, just as they should be.

The reason we chase guys, dream up relationships and pine for people we can’t have is that it distracts us from our boring day-to-day. The real reason women date assh*les is that they’re bored.”

And there we have it, folks. As bad as this article is, I’m glad the author realizes and admits to the bottom line here: She’d rather have an asshole because she thinks he’s exciting. She wants excitement from men because she’s bored, and she is bored because she herself is boring.

It makes sense. When your own life is boring, you’re going to look for excitement and drama anywhere, with anyone. That’s why they gravitate towards guys with bad behavior. They think, hey at least it’s something. Then of course what eventually happens when that gets old and she’s had enough of his shit, she’ll break up with him and start to ask where all of the good guys have gone.

How can this be avoided? Simple: Don’t be a boring girl. Instead, be an interesting woman.

You’ll then have no time for assholes.

How do you become a more interesting woman? Well, there are lots of ways.

Get outside and explore. Travel whenever and wherever you can.

Stand for a cause. What issues are important to you? Find ways to get involved.

Get a weird hobby. Make it yours. Me? I’ve modeled with pythons around my neck and I dance with a flaming hula hoop around my body.

Do anything that adds excitement to your life and gives you a story to tell. Then bring that energy with you when you are out with a guy. They will love it.

You don’t want to maintain such a boring life to the point where people who treat you like shit are “interesting” to you.

I mean no disrespect to the author. I’m sure miss Lauren is a lovely lady, but this mentality she has here has got to go.

When you learn how to become excited by your own life, you will no longer be impressed be assholes. You won’t want to be around them at all.

She closes by asking,

When would you end a relationship? When it’s gotten difficult or when it’s boring you to tears?”

When he keeps acting like a jerk, that’s when. If the relationship is boring, I’d work with him to make things exciting.

But I don’t put up with assholes.

West knows best. 💍
What would you add to this list?
Ladies, what does it mean for a man to be a good man to you?
⚔️ Love me some @nikita_gill