Today for International Women’s Day, I would like to take this opportunity to honor one woman in particular, American humorist and feminist writer Cynthia Heimel.

An email I received from reader and commenter Scharnhorst informed me that Cynthia has recently passed away, on February 25th, at the age of 70. In the email, he invited me to explore Cynthia’s writing and talked a little bit about how much he liked her work and respected the way she lived her life. Intrigued, I read on about this fascinating woman and writer.

Cynthia Heimel was a columnist, author, and playwright, who is known for her funny and unusual headlines as well as her tongue-in-cheek confessional advice pieces targeted towards women about sex, womanhood, and relationships with men.

She worked for several magazines and columns in the 80s and 90s, including The Village Voice, New York Daily News, Vogue, and Playboy. Her articles were often compared as a satirical and an informal take on advice you might see in women’s magazines, such as Cosmopolitan.

She published several books based on her columns, the first and most notable being Sex Tips For Girls in 1983, which put her on the map as a saucy, feminist, sex and love extraordinaire. However, Heimel admitted that she didn’t prefer to think of herself as sex expert. Regardless, she is known as the voice some might say inspired that of Candace Bushnell, whose column for the New York Observer about relationships and dating led to the birth of the series “Sex and the City.” 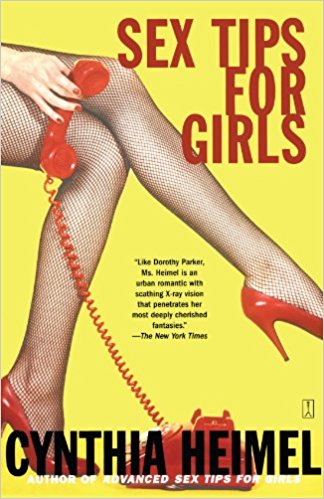 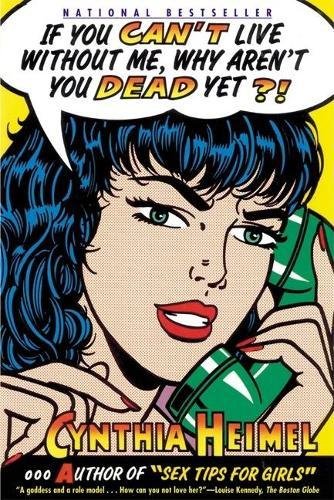 After digging a little bit into her work and who she was, I personally appreciate the fact that Cynthia focuses a lot on tackling sex as an issue that women should be able to explore more openly and honestly. She sends a positive message that women can and should feel confident in their bodies and sexuality, and she did so with her own style and flair.

It seems that she also touches on some certain aspects of revealing truths contrary to popular belief as well as encouraging women to be smart and strategic about approaching sex and dating.

Some of my favorite quotes by Cynthia.

Here is Heimel’s Law: Anything you fantasize about won’t come true. So just cut it out.”  – Cynthia Heimel, If You Can’t Live Without Me, Why Aren’t You Dead Yet?

A sense of humor isn’t everything. It’s only 90 percent of everything.”
– Cynthia Heimel, Sex Tips for Girls

One does not have to sleep with, or even touch, someone who has paid for your meal. All those obligations are hereby rendered null and void, and any man who doesn’t think so needs a quick jab in the kidney.” – Cynthia Heimel, Sex Tips for Girls

You love somebody, and then you don’t love them anymore. But if you really love somebody, you always love them, don’t you? Isn’t there always some small part of you that reads their horoscope in the paper everyday? – Cynthia Heimel, A Girl’s Guide To Chaos

Women are not ladies. The term connotates females who are simultaneously put on a pedestal and patronized.” – Cynthia Heimel, Get Your Tongue Out of My Mouth, I’m Kissing You Goodbye!

We all have rosy memories of a simpler, happy time- a time of homemade apple pie and gingham curtains, a time when Mom understood everything and Dad could fix anything. “Let’s get those traditional family values back!” we murmur to each other. Meanwhile, in a simultaneous universe, everyone I know, and every celebrity I don’t know, is coming out of the closet to talk about how miserable they are because they grew up in dysfunctional families.    – Cynthia Heimel, Get Your Tongue Out of My Mouth, I’m Kissing You Goodbye!

Those rosy memories we all share are actually memories from our favorite TV shows. We’ve confused our own childhoods with episodes of “Ozzie and Harriet,” “Father Knows Best,” and “The Brady Bunch.” In real life, Ozzie had a very visible mistress for years, Bud and Kitten on “Father Knows Best” grew up to become major druggies, and Mom on “The Brady Bunch” dated her fifteen-year-old fictional son. – Cynthia Heimel, Get Your Tongue Out of My Mouth, I’m Kissing You Goodbye!

We have to have faith in ourselves. I have never met a woman who, deep down in her core, really believes she has great legs. And if she suspects that she might have great legs, then she’s convinced that she has a shrill voice and no neck.” – Cynthia Heimel, Sex Tips for Girls

Reader Scharhorst sent this info about Cynthia because he thought I would be interested in her work and her message, and he’s right. I think what’s so refreshing to me  about her writing so far is that she shares personal wisdom that is still relevant today. Her advice on sexual self confidence and understanding relationships with men would be beneficial and entertaining to women in 2018 and onward.

Cynthia Heimel is definitely a woman to remember, and the legacy that her work leaves behind is definitely worth passing on to young women of future generations.

If You Can’t Live Without Me, Why Aren’t You Dead Yet?!

A Girl’s Guide to Chaos

Get Your Tongue Out of My Mouth, I’m Kissing You Goodbye!